The Dirty Truth About QR Codes

This is going to be pretty brutal, so if you’re not in marketing and you don’t have a basic disgust of humanity (as all great marketers should possess), please stop reading this right now.

Now that the weak-stomached are gone, let’s have a laugh at the stupidity of the average consumer. Have you seen the new commercials where some family member is talking about his or her son or daughter that died in a car crash because they were texting while driving? The person relates what a wonderful person the driver was and how they drove into oncoming traffic because they were texting. Oh, boo-boo! Your moronic child has been warned about texting while driving for over a decade and couldn’t figure out the danger for themselves. The one thing the commercials don’t mention is the fate of those innocent people in the oncoming traffic. Were they killed as well? Oh, let’s not concern ourselves with the other person. It’s an all-about-me world and there’s no sense of responsibility and the concern for the easy way through life has overtaken the need to use one’s brain.

The perfect view of our future is Star Trek… the original one where Captain Kirk gives a direction to Ensign Sulu and he pushes three buttons on the control panel (planet, speed, go) and BINGO! The new Star Trek has them punching unlabeled colored spots at light speed for twenty minutes for a planet, at warp speed and go. It won’t work that way in the future. Technology is making things easier for couch potatoes to achieve anything with the push of a button and QR codes are the new button. 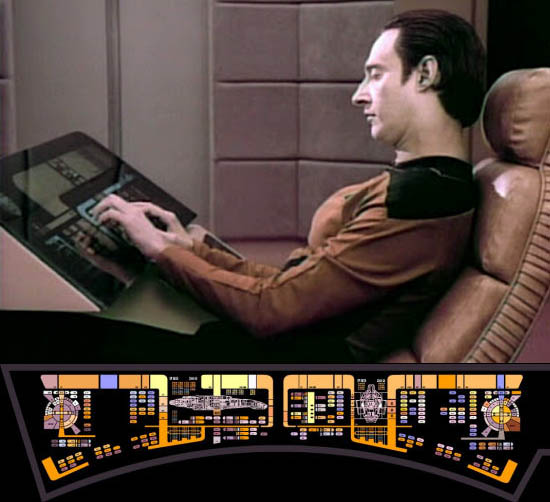 Detractors of QR codes say why use a QR code when it’s easier to just enter a URL. Mmmm, no! It’s not because it takes effort and those of you who wonder why your QR code failed on your last campaign should probably rethink how much work you put consumers through to use the codes and what consumers got out of the link. Did they have to go to a site and do the work of navigating by themselves? Too much work.

Did you send them on a scavenger hunt? What fun… except consumers don’t want to work for their rewards. Save it for the kid parties. Did they have to read tons of copy for further information? We are a sound-byte society. Keep it simple and short… a video under the average attention span of 30 seconds. Make it easy for Mr. Sulu and you can’t go wrong.

There is no better bridge between the print and digital world for the average consumer and marketing budgets of all sizes. Sure, people say Augmented reality is the top technology and yes, it’s fascinating… as an expensively produced gimmick at this point in time. Likewise, NFC has its uses and place and while the technologies evolve, there will be a place and use for all of them in the near future. Right now, however, the QR code is the king and site like uQR.me, that generates QR codes not only with the designed intricacies marketers and consumers want, they are easily tracked for superb analytics and recyclable (which other QR code generator sites do not achieve), which is a boon to marketers who want to extend the life of campaigns by switching content but not reprinting ads with new codes.

Now, of course I’m being tongue-in-cheek about glib portrayals of people dying and calling consumers stupid. The point was to pull readers into the article with pointed content and if you made it this far into the article, it obviously worked. Using QR codes successfully is no different, in practice. The call to action must pull in the consumer to find useful content. Detractors complain that merely linking to the home page of the company site isn’t enough, and they are correct. For every QR code, there should be content placed on a special landing page and site prepared especially for mobile users.

It’s important to use marketing tools correctly and that may very well be the source of complaints about QR codes. Ease of use, clear call to action, useful content and ease of navigation, as with any web site, really, is the key to creating a winning QR code campaign. Far away billboards and fast moving vehicles can’t be scanned, especially when the vehicles are being driven by people who are texting. You don’t want them trying to scan billboards at the same time.