QR Code Failures… and Why

The only thing holding back QR codes are the nay-sayers who either believe their misuse is the fault of the tool and those who believe Augmented Reality and NFC will wipe QR codes off the digital map. Obviously QR codes have not, nor will they die. Scanning of QR codes has only increased (see QR code global statistics app) and while AR and NFC have yet to rule the world, it’s important for marketers to understand why QR codes didn’t work on their printed material. So, here’s some classic blunders that negate having a QR code at all!

The QR Code is Too Small

The First fail is QR code size and scannability. Having this small code runs the code together and it can’t be scanned. The curvature of the straw also makes it impossible to scan a code that small. Basically, this application of a QR code “sucked!” It’s not that putting it on straws is a bad idea but have it as a larger, flatter attachment, with a call to action, of course.

Again, the QR code is placed up high, which will work well with how far someone will need to be to scan it, so the curvature of the code might not matter, since you’ll need to be 100 meters away… and on the top of a building to scan it. 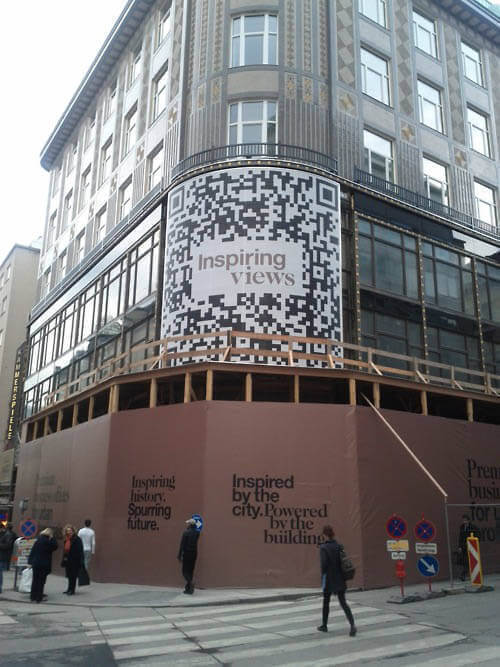 If that was the only spot a QR code could be put, then angle it down a bit, make it smaller so there’s no huge curved area… and search again for a better spot!

This photo is fake! If you’ll notice, the QR code isn’t following the curvature of the plane’s fuselage. It was created and posted to discredit QR codes. Naturally, no one except people looking out the window at the airport could scan this QR code unless it was a bit larger. A good call to action would be to have people waiting at the gate, scan the code to purchase a premium seat or sign up for wifi.

Just in case you don’t think the QR code game gets dirty and danger-filled, this Esquire cover was trashed for the “QR code” not being scanned at all.” Um… it’s an Augmented Reality code… just like the headline says… because it was the AR issue. DUH! What can one say about this fail? If need be, use the QR code “beautifier” can help you save space. By using the “beautifier” to hide the code within the logo, it would have been scannable. Too bad their chance “slipped” away!

Too Fast, Too Curious!

“Oh! I get a choice of what device to use for one of these… oh, I missed the bus!”

Yes, things that move quickly on the street and in the air are not good for QR code placement. Usually they require you to stand in the street or jump from a plane to scan a code. There’s no redeeming this. If it moves fast, just don’t bother.

Not only will drivers not whip out their devices to scan this code while moving in traffic but there’s nothing to scan. This “you’re fired” moment was due to poor planning. Always know where your QR code is going to be placed! On the bus it was a huge ventilation system but there are other places QR codes are placed that show lack of planning on the part of the marketer. 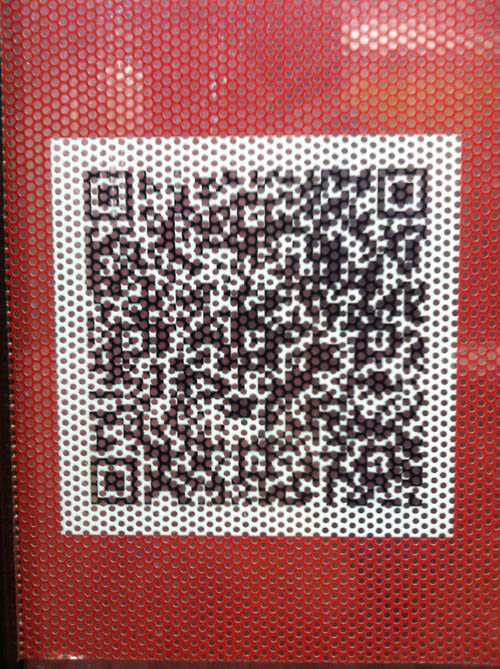 I guess they really didn’t want people to get a discount.

Sure, hang a QR code in orbit so I can scan it easily! And please don’t give me such a motivating reason to scan these codes once I convince a stranger to let me sit on his or her shoulders so I can scan these. I’d love to scan this code while doing 70 on the highway! It’s usually not a good idea to have potential customers sticking their arms out in front of speeding trains for a discount coupon. The funny part, while the track is littered with arms clutching mobile devices, is that you can’t get an internet signal in the subway! Hopefully this isn’t a bottle of whiskey. Whatever it is, after draining it, will the QR code scan through the bottle. I say, “no!” Would you be willing to walk up to one of these very athletic ladies and ask them to bend over so you can get a shot of their codes? Exactly! Another brilliant though is the hopes of using satellite mapping services, like Google Earth, capture your rooftop QR code so people can scan for more information after searching your location. Blurry photos taken from orbit that can be scanned off a monitor correctly hasn’t happened yet.

The award for the dumbest use of a qr code is this QR code for downloading a QR code scanner. Sort of a “chicken or the egg” thing. I’m not going to chance it!

Okay! Miss out on the possibilities QR codes hold for effective marketing. The biggest companies use them properly and have had great success. Just because you’re not Coke-a-Cola doesn’t mean they won’t work for you but they have to be used properly! Remember: it’s not the tool that causes problems. It’s the hand that wields it!